The Plenary Council: Some reflections from a Cardijn Perspective 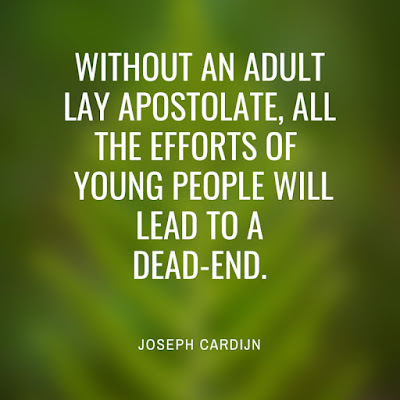 The Church and The World

The collapse in awareness within Australian Catholicism of the ‘lay apostolate’ is evident in the now almost universal use within the church (including on the ACBC website) of the term ‘lay ministry’ (or ‘lay pastoral ministry’). This almost exclusively refers to internal church work, and is apparently oblivious to the unique and indispensable role of every lay person in the ‘world’ (as distinct from the ‘church’).

Naturally Pope Francis’s term, ‘missionary disciples’, is also widespread today. It has been enthusiastically adopted by the revelation-based evangelical stream in the church (ie, primarily ‘word’ based mission), but might equally apply to the ‘see judge act’ method of the lay apostolate (ie, primarily ‘deeds’ based mission).

Unthinkably, from Plenary Council literature so far, there seems to be a real possibility, in fact a likelihood, that the ‘see judge act’ method would be little considered in terms of potential pastoral strategies.

There is just one mention of ‘see judge act’ in the six Thematic Discernment papers of the Council. Paper No.4 (Humble, Healing and Merciful, p.17) proposes it as a method of collegial ‘corporate discernment’ among leaders in church institutions. This is a positive, but also a limited if not niche role, apparently with little appreciation that every lay person is a leader in his or her milieu or world. Nowhere in the discernment papers is there anything about its primary purpose: forming ordinary Christians in and through their daily lives, and assisting them to transform the world.

Likewise, there is not a single mention of the YCW or YCS in any of the discernment papers. By contrast numerous other evangelical and ‘new ecclesial’ movements are cited in the context of potential new pastoral methods for the church.1

The Plenary Council’s Instrumentum Laboris is similar. It makes two small but favourable references to Cardijn’s method. The first (No.96) references it as a ‘Church’ method, ‘often’ used to read and discern the Signs of the Times. The second reference (No.156) also conceives the Cardijn method primarily in terms of discernment: ‘a methodological paradigm for pastoral discernment at local and international levels, including the recent Synod of Bishops and regional Bishops’ Conferences’.

As with the Thematic Discernment paper No.4, neither of these references relate to the essential ‘personal formation and social transformation’ intention of the method. Instead, they reflect its use in recent decades in ‘the church’ – for discernment by leaders of church institutions, and as a structure for ecclesial and papal statements – rather than as an action-based method of formation for ordinary lay people in ‘the world’.2

‘See judge act’ appears to be almost dutifully noted, without any vision or conviction that it might become or even be considered as a grass-roots pastoral strategy for personal formation and social transformation within parishes.

By contrast the Instrumentum Laboris gives the term ’missionary discipleship’ its own heading (pp.43-44), and it is discussed specifically in the context of ‘parishes and communities’ as a pastoral strategy.

What exactly ‘missionary discipleship’ involves however is not clear. References to promoting ‘the spiritual life and an intentional, missionary discipleship’, and parishes becoming ‘a school of holiness and evangelisation’, associate it with the new evangelical methods. Yet references to ‘the missionary vocation of every Catholic’, ‘the transformation of the world’, and ‘the formation of adult leaders’ is the language and expertise of the Cardijn movement.

Perhaps both approaches – the deductive and the inductive – could in fact work side by side, to their mutual benefit. As the Instrumentum Laboris (No.8) reminds us, ‘God speaks to us in a variety of ways’. But that could not occur unless the Cardijn conception of the ‘lay apostolate’ was acknowledged, and its method understood.

Although the missionary dimension of the laity’s work in the world is acknowledged (eg, Instrumentum Laboris, Nos.42, 86, 126)3, the concept of the ‘lay apostolate’ has virtually disappeared from the literature and imagination of the church. With it has gone both the powerful conviction of ordinary lay Catholics that they have a unique and indispensable apostolate in the world, and also the method used to form and sustain them in this vocation. The grass-roots potential and the method of ‘see judge act’ escape our thought-leaders, and some advocates of the newer evangelical methods (including bishops) declare it to be dated, or superficial.

And yet the impact of the YCW and YCS in forming generations of Catholics has been extraordinary, their good work and influence incalculable.4 Almost within the lifetimes of the pioneers, their stories, and their method, have either been forgotten or dismissed.

However, as is evident in the Missionary and Evangelising? discernment paper, and the Instrumentum Laboris, we are not sure what should replace it. In this regard it would be a useful exercise to translate the term ‘missionary disciples’ into a concrete pastoral method, or methods, which provide for both ‘action’ based, and ‘word’ based, starting points.

Deeds, or works, are integral to mission. Provided that both ‘action’ and ‘reflection’ are practised, ‘evangelism’ (or ‘formation’, or ‘conversion’) can begin anywhere along the sacred-secular or word-action etc continuum. Lives and the world are transformed, and new things created when the concrete problems of life interact with the spiritual realities of the gospel, reflection, prayer, eucharist etc. ‘See judge act’ is a structured, proven catalyst for this change.

This is Cardijn’s ‘Christian dialectic’, in which the contradiction between ‘the truth of reality’ and ‘the truth of faith’ can be resolved through the ‘see judge act’ method. For countless young people it began a lifelong ascending spiral of discernment and action. ‘Each step is an advance into the unknown and each step is an invitation to a further commitment’ said the first international YCW leader.5 Or, as the Instrumentum Laboris (p.55) has it, we ‘participate in the movement of God’s love for the people and the planet’.

The vocation of the laity begins in the secular world. The Plenary Council needs to consider and endorse the ‘life’ based methods of ‘action-reflection’ and ‘formation through action’ used by the YCW and YCS, by adults in some parishes, and by some Catholic organisations in grass-roots service and missionary programs. In the footsteps of Mary MacKillop they are learning to ‘see’ a need, and then ‘doing something about it’.6

The Council should also strongly encourage the multitude of lay groups with a ‘life’ and ‘action’ orientation, such as for couple and family formation (Teams, Marriage Encounter), Christian Life Communities, Small Christian Communities and many other specialised or parish groups.7

Signs of the Times

The Plenary Council might identify, through a broad Signs of the Times exercise, key problems or issues both in the world and in the church, as a starting point for its discernment and action. Eg:

The Church’s mission is to the world and the laity, whose arena is the world, need to bring concrete issues to the doorstep of the Plenary Council. With the decline of the apostolic religious orders that have historically responded to ‘life’ problems, it is critical that the church develop governance and missionary strategies, including the lay apostolate, that will encourage the laity to respond to social challenges. Such issues would encompass both:

Asking ‘who is my neighbour’ and providing a service to him or her is surely a legitimate starting point if not the essence of any rebuilding of the Church.

‘The Church’:
Some Suggestions

2 Recent or present uses of the ‘see judge act’ method by Catholic institutions (eg Mission Australia, Caritas, ACU, and no doubt some Catholic college social immersion programs) for grass-roots service and missionary purposes, should also be recognised and investigated by the Council.

3 Although, as Stefan Gigacz observes, the primary nature of lay engagement is identified in ‘institutional’ terms by the Instrumentum Laboris, which does not tally with Vatican II’s conception of the laity. Eg: https://plenaryreflections.blogspot.com/2021/07/the-lay-vocation-serving-world-beyond.html

4 Eg, in work, civil society, politics, unions, business, scholarship, daily and family life, in leadership of church groups and organisations, and in the large numbers who entered religious life.

8 Some answers might perhaps be found in the experience and wisdom of the Asian Catholic church.