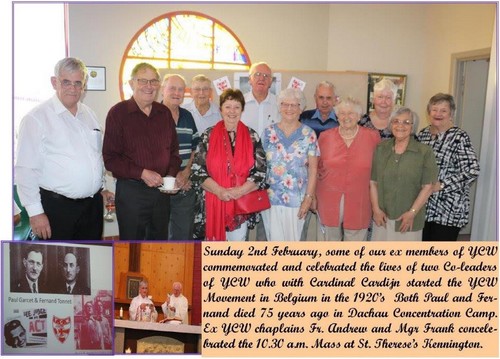 This is Mgr Frank's homily for the occasion:

Today is the Liturgical feast of the Presentation of the Child Jesus in the temple at Jerusalem . The Catholic liturgy celebrates this day as  a prelude to our celebrating our own Baptism.

Recent days has marked the liberation of  Auschwitz, 75 years ago  and is being marked beginning on January 27 by the Jewish community and others .

Today 2 February 2020 is the 75th anniversary of the death of Fernand Tonnet, his fellow worker for nearly 30 years Paul Garcet died on 23 January 1945. Both died in Dachau. Both were founding members of the JOC (YCW) with the then Fr Josef Cardijn and his young disciple Victoire Cappe in Belgium.

During World War I Cardijn was arrested and later released while Tonnet was gassed whilst serving in the army and Garcet kept the movement alive.

During World War II, Cardijn was again but later released while Tonnet was also arrested in 1943 , and sent to a death camp Esterwegen in North West Germany. Later Garcet was arrested. Tonnet and Garcet sent to Bayreuth, another death camp in March 1944 and moved to Dachau in November 1944.

We know that many millions died in these death camps, not only Jews but ordinary folk who were accused of  not bowing to Hitler. Thousands of priests and eeligious like wise died. Some have been canonised, including  Edith Stein, Carmelite Sister, Maxmillian Kolbe, priest of the Divine Word congregation. Hundreds are worthy of such recognition. We Christians are perhaps less well organised than our Semitic Brothers and Sisters.

We seem happy with a few saints and let the Times roll on. People are again taking up the cause of Tonnet and Garcet. Many years before his death, Cardijn told the world that the reason for the push for canonisation was not so much their work and death in the Dachau camp, but their work and example in awakening young people to the call of their Baptism.

The new movement and the new methodology - the SEE, JUDGE, ACT transformed people. Their work was warmly welcomed in 1925 by the then Pope Pius XI, who greeted them with the words "at last some one speaks to me about the workers."

The Pope blessed the delegation and authorised the YCW and it grew and found fertile ground in Australia in the late 1940s  as many at this Mass can attest. (Present on this Sunday was Len Chalkey  the first fulltime worker).

There are many reasons to celebrate his anniversary:


Part of the genius of the YCW was the re discovery of the baptismal calling by ordinary young workers. It made sense to them  and the subsequent developments opened worlds of opportunities and brought a new generation of laity into full active participation in the life of their Church

One might say the YCW began a first look at the real meaning of today's feast:


It may or may not be a coincidence that Fernand Tonnet died on the Feast of the Presentation, but what is true that hundreds of thousands of people are in debt to him and his companions for the movement he jointly fostered that helped reawaken the gift of baptism.

Many in this church today are numbered in those thousands. 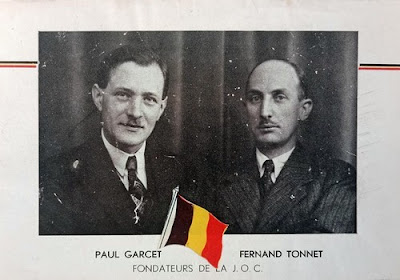