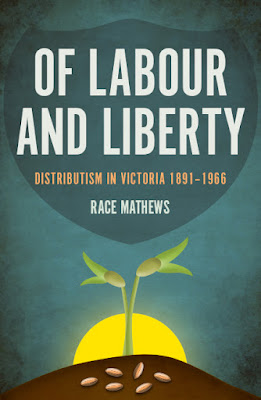 Written as a doctoral thesis for Catholic Theological College, Melbourne and the University of Divinity, Mathews' book tells the story of the development of the cooperative movement in the Australian state of Victoria.

The book is a stunning tribute to the role of Catholic individuals and groups over the course of this history. In particular, Mathews notes the seminal impact of Pope Leo XIII's encyclical, Rerum Novarum, and the role of English Cardinal Henry Manning, both of whom also had a great influence on Cardijn.

In the Australian context, these ideas were taken up by Sydney Cardinal Patrick Moran, who was a great defender of worker rights, and Archbishop Daniel Mannix in Melbourne.

The Campion Society also played a significant role in these developments, including Kevin T. Kelly, a key figure in the arrival of the YCW in Australia.

Later, however, the Melbourne YCW played a critical role in the actual concrete development of cooperatives in Victoria, particularly through the role of Ted Long.

Mathews also highlights the development of the worker cooperatives in Mondragon in Spain's Basque region, which were created by Fr Jose Maria Arizmendiarretta, who worked closely with the JOC study circles in the town.

Race Mathews' new book is an important contribution not only to labour and cooperative history but also the history of the YCW.

To be launched by The Hon Steve Bracks AM
When: Wednesday 26 April, 6pm for 6.30pm
Where: National Union of Workers (NUW) Headquarters, 833 Bourket Street, Docklands
Cost: Free event, but please RSVP to Sarah Cannon.

Race Mathews and Barry Jones in conversation
When: Wednesday 3 May, 6pm for 6.30pm
Where: Readings Bookshop, 701 Glenferrie Road, Hawthorn