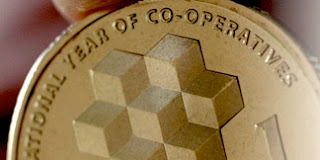 Why is the Church in the English speaking world so largely silent about the Mondragon cooperatives’ success,” writes Stefan Gigacz in CathNews, echoing a recent article in Eureka Street  by former federal and Victorian state MP Dr Race Mathews.

“It’s a relevant question for Catholics in the International Year of Cooperatives and it’s one that I have been asking myself since I first learned about the Basque worker cooperatives thanks to a  BBC documentary The Mondragon Experiment that screened on Four Corners during the early 1980s.

“In 1983, I travelled to Mondragon, which is known in Basque as Arrasate, and is located at the western end of the Pyrenees that divide France from Spain. I went with Bernadette McEvoy who was the Australian YCW president of the time and we were accompanied by two Korean YCW leaders.

“Founded in 1956 by the Catholic priest Father Jose Maria Arizmendiarrietta, Mondragon already comprised close to a hundred industrial worker cooperatives at that time although it had not yet taken on a genuine national let alone international dimension.

“The tour that we made of the Mondragon administrative complex quickly impressed on me the key role played by the Caja Laboral cooperative bank in funding the growth of the corporation. That lesson was reinforced soon after I returned to Australia and when a group of us tried to start a housing cooperative only to be refused a bank loan simply because we were planning to establish as a cooperative!

“However, I also remember thinking to myself that the real test of the Mondragon model would be how it survived the worldwide economic slowdown of the 1980s.

“The stunning answer of course was that the Mondragon Cooperative Corporation has since grown into one of Spain’s largest conglomerates, with over 80,000 workers, and over 75 subsidiaries in some 17 countries.”
Read the full article here!